How I Became an Instructor at the Bead & Button Show and how you can too.

The Bead and Button Show has long been considered the most prestigious show in the US for jewelry crafting. At its height, the show boasted over 300 venders, 200 instructors and 800 classes. And was the second largest consumer bead show in the country. It is also the second largest convention for the city of Milwaukee only behind AmFam. But as they say, everything changes. And indeed the Bead and Button show has changed in the last 5 years. However, much of what makes the show great (in my opinion) still stands true. There may not be the same number of vendors or classes but it still attracts instructors and students from all over the country and around the world making it the most interesting show to attend (again, in my opinion).  Additionally, as it is concentrated in one facility, as opposed to Tucson which is scattered throughout an entire city, the “feel” of the show is much more intimate than Tucson.

I first went to the BnB show some 15 years ago as a spectator shopping for my then bead store. For those purposes I can not say that it was a show for me because I was not really a consumer. I was a wholesale buyer. Even so, I continued to watch the show progress. Then one day I found myself reading a Bead and Button Show catalog again, which changed everything.

After reviewing the catalog I decided that I could be doing that. That? Teaching “that is”. So I applied. And applied. And got a big fat rejection. During this time we started a new business that involved some manufacturing and distribution in the beading industry, The Urban Beader. This business would take me back to BnB as a vendor and this is where my journey to teaching truly sky rocketed.

How I got my start

Back in those days, the wait list to be a vendor was about 3 years, unless that is, you have such a unique business that it would complement the show. We were in! While we were there that first year I was introduced to a store owner whom by the end of show hired me to teach at her store. That Fall I was at her store teaching for my first time out of state and the second time away from my store. By then, my application to teach at the next BnB had already been rejected. Unbeknownst to me, there were several students in my classes who had some influence at the show. Not that I can even remember who they are.

About 2 weeks after teaching at this shop, after I had already received a rejection letter, I received an acceptance letter! What? Out of 6 submitted 2 were accepted. One of my classes sold out in the first FOUR minutes of registration. A few days after the opening of registration I received a contact asking for more classes. Then again a couple of weeks later. And again. By the third time, I decided I should decline in fear of getting in over my head. The rest is history.

So what does all of this have to do with how You will get into the Bead and Button show? I’m getting to that.

Here is pretty much what I know.

First of all the competition is great. You sort of had to wait for someone to quit before there was an opening. If you were there in the beginning it was pretty much assured that you would be a lifer. And back in the day (when I first applied) it was implied that there was a lot of politics. Given how I got into the show, I had to agree. I couldn’t prove it but, it was what it was. Through the years (I hoped) it was merit. My classes sold well, I made nice with people and made myself easy to work with.

What is different for me? Even at this point 12 years after the fact, I do not believe that it is any different for me than it is for anyone else; with the exception of first timers. If you are applying for the first time, you will need to submit samples, a resume and letters of recommendations. Some people seem to believe that this is absurd. But is it? Would you hire someone on their word? I wouldn’t. After my first year I was no longer required to submit letters or resume, but for years I still had to submit samples. This practice only ended about 5 years ago, if I remember correctly.

After submission, the samples are sent back and a letter is sent out, accept or reject. No explanation but just a thank you for your time kind of thing. I know this really hard for most people. You need to sort of get over it. There are thousands, literally thousands of submissions by hundreds of instructors. There is just not enough man power to send out critiques of any kind for all of the rejects. What people don’t understand and what I have come to learn is that there are only 4 people managing the show throughout the year. You may think that there is a large staff when you are attending the show, but those are all temps. Pretty much it is all hands on deck (meaning Kalmbach employees) to work the 10 days of the show. The receptionist is at the registration booth, the accountant is the guy you hear on the intercom and the marketing guy is registering the instructors when they arrive. So as a matter of practicality there is just not enough time/people to send out personal rejection letters.

Now that you know this, don’t take it personally. New management came in about 3 years ago and as far as I am concerned, the politics have been removed. I truly believe that they look at projects and consider the following: what is the current trend, what does the show traditionally sell most of, is the project appealing, how many of those techniques have already been accepted?  Unless you have passed some of these requirements, I am unsure that YOU have anything to do with the decision if you have references and a track record.

The problem I see most with instructors, and this is true with most people in general, is that they are not honest about their work. Most people think their work is unique and great, but is it really? Lets be honest. How many different spinner rings could there be??? Yet people continue to submit it. Which then leads to the question, how many spinner rings do you think BnB should accept? You gotta keep it real.

What is my best advice? Look at the previous year’s offerings and submit something that is different/unique. Be honest about your designs. What techniques are you bringing to the table? Do you really think an experienced bead weaver is going take yet another right angle weave class? Probably not. Submit more than several projects. I like to play the numbers, I have always felt that if I submitted more, my chances would go up. Think about it, the odds might go up. My second year I submitted 6, they took 4. The next I submitted 10’ish they took 6.

Just because you have been rejected one year does not mean it is over for you. Try again. And again if you have to. You never know when instructors drop off. Because for one reason or another they will and do drop off. Trust me, one I will too.

I have talked to the show much since the new management to gain an understanding of their working style. From that, this I know to be fact; they are working on merit. If someone’s class does not sell and/or they have not brought anything new to the table, their class/es will be rejected if they submit the same ones. It does not matter how long they have been teaching. It is all about the bottom line. The show is accountable for revenue, like all businesses. Thus they need to choose classes that will produce more revenue and keep the show fresh. It is just business.

Don’t believe what you hear. There are lots of people out there who will not take accountability for their actions. They believe that they are so good it couldn’t possibly be them and that it had to be the show being whatever they are being. Let me say, it IS the show being whatever they are being. They are being a business looking at revenue. Despite any complaints I have ever heard about an instructor, if their classes are selling, they will be invited back.

So if you have been rejected look at it honestly, refine your work and perhaps even go a different direction.

Good luck! See you at the show.

This is me at the front entry to the Bead and Button Show 2014 and that is my project. It took about 8 years before I got that honor. Woohoo me. When it rains it pours, my projects were on 3 posters that year. Then it happened again the following few years. I don't even take pictures anymore. I think the way to make that happen is to make sure you have damn good pictures. 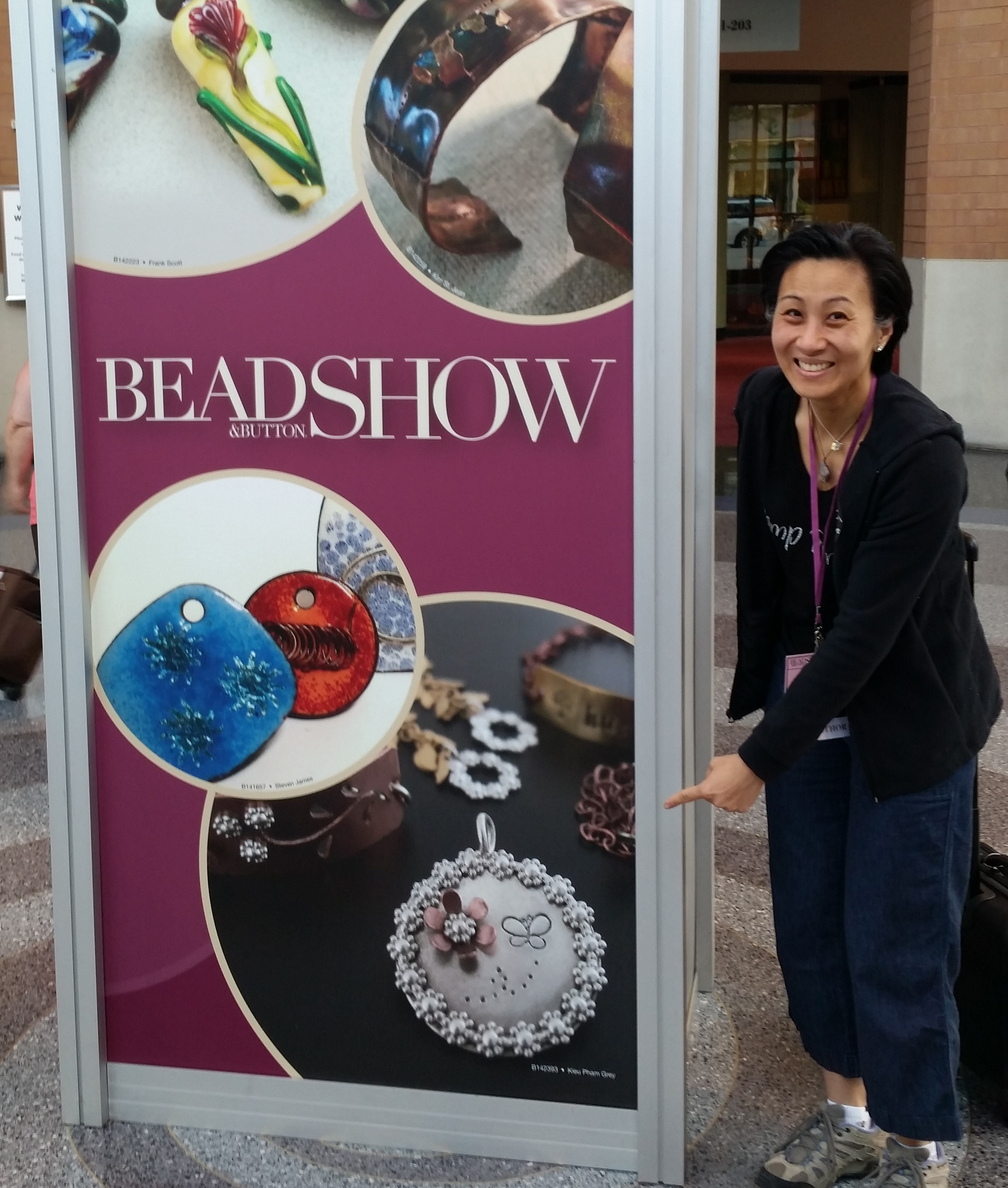